For pretty much the whole time since I took up running I’ve been (with the general exception of my weekend long runs), an evening runner. For a range of reasons including a tendency towards going to bed late (and therefore loving or needing an extra few minutes in bed on the flip side), to having various jobs where getting to work early doors was often part of the deal, to the sheer weight of habit itself, I’ve just never been able to sustain a regular early morning regime.

It’s not even that I didn’t want to run in the mornings. I mean what is better than the energy buzz from an early run, or the self satisfied and slightly holier than thou feeling you give yourself by getting up with the sun and crushing a workout before the rest of the world has rubbed the sleep out of their eyes? Not to mention that sense of relief that you get when the evening comes around and you realize you don’t have to get out and run 8 miles, because you already did it in the morning.

That said, and even when confronted with a host of good reasons to do something differently, there are times when you need a helping hand, or a kick in the pants, to set you off on a new path. Right now I’m being given all the motivation I need courtesy of Mother Nature, who has seen fit to turn up the temperatures in Seattle to ‘effing hot’ and if there is one thing I dislike even more than getting up early in the morning, it’s running in extreme heat.

2015 was, I believe, the hottest June on record (beating the previous Seattle record by a whopping 3 degrees (78.9F. if my sources are accurate), and July is on track to be hotter still. Presently we are on the 5th consecutive day of temperatures hitting 90F. or higher, and are several days away from what some of us might call respite. So, left with a choice between getting up with the birds and running early, or taking a chance on maintaining the strength and motivation to stick with the evening running on these hot days , I’ve elected to give the morning thing a spin.

There is a secondary motivation behind the change, namely that I’m currently ‘between things’ on the work front (I think ‘in transition’ is the HR term du jour for this), and I really want to avoid falling into an unsustainable comfort trap of training mid morning or afternoon, at a time that will need to change the minute I’m back working. I figure morning runs are likely to be the most seamless option to continue training, and if I’m wrong, I’ve already proven over the past 5 years that I can make the evening thing work.

I’m not going to pretend that this is an easy thing for me to do – and I have to be realistic enough to know that on some days, it simply won’t work. I read somewhere that it takes repeating something at least 21 times before a habit is formed, so I have a good few early morning alarm calls to answer yet, before I can say I’ve cracked this nut. That said, I’m giving it a go, and on the occasions I’ve successfully dragged myself out of bed, I’m enjoying running in the relative cool of the high 60’s rather than the high 80’s, and loving the buzz and energy I’m getting for the day ahead.

Apart from the best piece of advice to execute any change being to ‘just do it’, there are a few good nuggets on becoming a morning runner here from Runners World, to which I would add my own tip, which is to get prepped the night before – leave as few excuses as possible hanging out there for you to hit snooze; lay out your gear, and be ready to roll as quickly as you can when you wake up. Don’t forget to leave enough time to digest a small snack and quick caffeine hit before you head out.

One other difference I’ve noticed running around the neighborhood at a new time of day, is the different cadence to the traffic. Running at a regular time-slot I’ve developed a sixth sense for traffic flow, which streets will be busier, even the general mood of the drivers themselves. It’s a subtle thing, but morning traffic is a little different, and I’ve had to be alert.  Something for you to think about – be safe!

In among all of this talk of weather and alarm calls, I actually did some running this week, moving up from 5 to 6 runs during the week, bringing my weekly mileage total up over 40, which was my goal. So far all my running can be classed as ‘easy runs’ (more on what this means another time), and I’m really just getting back into a good rhythm of regular running. Next week I plan to gently ease a little speed work into the mix and see how that goes. There are 16 more weeks before I toe the line in DC, but so far I’m enjoying my time out on the road.

My numbers for the week:

And cumulatively through two weeks: 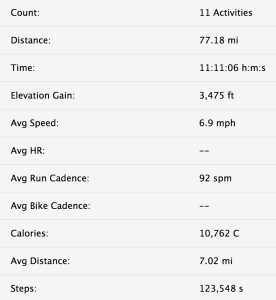 All the best and keep on moving.