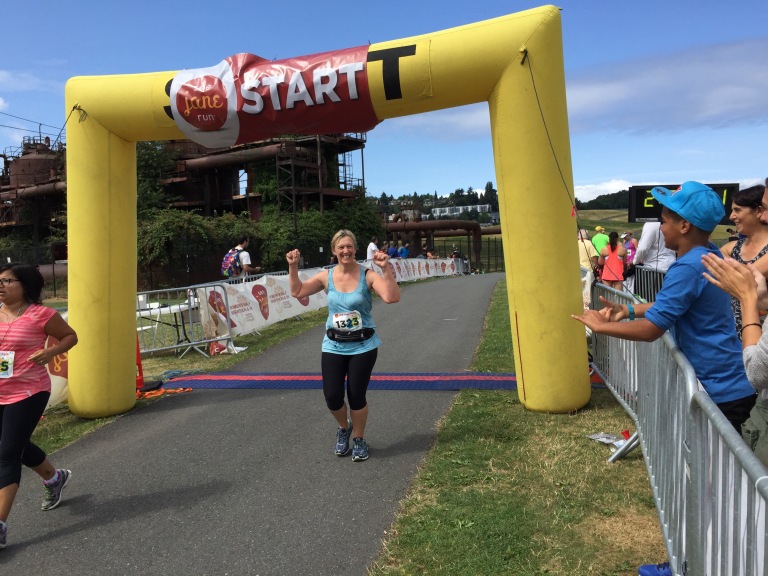 Week 3: Getting inspired on the road to the Marine Corps Marathon

What a great morning I had today.

For six years my long suffering wife Jo, a runner’s widow by any measure, has tracked me around the country, (well, the continent to be accurate), from Vancouver BC, to Phoenix, New York and Bellingham, with some Victoria and Seattle thrown in for good measure. Always a sight for sore eyes (and legs!), cheering me on, giving me that extra boost of motivation just when I need it most. One time I actually correlated my pace per mile with times I’d seen my family on the course, and perhaps to no surprise, I’d nearly always find myself running faster right around those times they popped up in the crowd.

Well today I was able to make a tiny repayment on that debt of gratitude by cheering Jo on through her first ever half marathon.

If you’ve never been to watch a race, I highly recommend it. Maybe I get more from it having completed so many races in recent years, and being able to really put myself in the shoes of those runners, but there is something so powerful, raw and honest about seeing people from all walks of life, of all body types, and from a vast spectrum of age and ability, putting themselves on the line to complete a strenuous physical goal.

Every one of them had their reasons to be there, be it a competitive goal, a fitness goal, raising money for charity or in memory of a loved one. Maybe they were doing it just because they could. Whatever the reason, those runners set their sights on a goal and got it done. The time for talking or debating about whether this was a good idea had long since passed, replaced by a bias for action and a resolve to do what they set out to do.

For me, this is one of the most impressive and motivating aspects of endurance running (and endurance sports in general). Of course the training is hard, and there are inevitable sacrifices to be made in order to be ready to compete – trust me, I am very familiar with this aspect of the sport. But sometimes, and especially for a first timer, the single hardest step to take in the whole process is that first one you take in your head, when you make that commitment to say “yes, I’m going to get this done”.

So Jo – congratulations sweetheart. Congratulations for the 13.1 miles, but most of all, congratulations for being such a good role model to the kids, for inspiring us all and for doing what you said you would do by making it to the start line. Everything else from there is (as they say in some parts of the world I have inhabited), gravy.

While this is on my mind, I thought I’d leave you with this rather wonderful quote from Hugh Laurie, that rather sums up what I feel about this:

“It’s a terrible thing, I think, in life to wait until you’re ready. I have this feeling now that actually no one is ever ready to do anything. There’s almost no such thing as ready. There’s only now. And you may as well do it now. I mean, I say that confidently as if I’m about to go bungee jumping or something – I’m not. I’m not a crazed risk taker. But I do think that, generally speaking, now is as good a time as any.” (Hugh Laurie).

Whatever is on your waiting to be ready list, I think soon, is now.

My numbers for the week:

And cumulatively for 3 weeks:

*with a h/t to the incomparable Smiths.